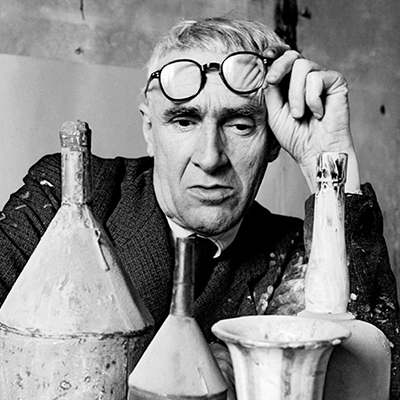 Giorgio Morandi was an Italian painter and printmaker who specialized in still life. His paintings are noted for their tonal subtlety in depicting apparently simple subjects, which were limited mainly to vases, bottles, bowls, flowers and landscapes.

Morandi cannot be closely identified with a particular school of painting. His major influence was the work of French Post-Impressionist painter Paul Cézanne, whose emphasis on form and flat areas of colour Morandi emulated throughout his career. Morandi first exhibited his work in 1914 in Bologna with the Futurist painters, and in 1918–19 he was associated with the Metaphysical school, a group who painted in a style developed by Giorgio de Chirico and Carlo Carrà. Artists who worked in the Metaphysical painting style attempted to imbue everyday objects with a dreamlike atmosphere of mystery.

Morandi developed an intimate approach to art that, directed by a highly refined formal sensibility, gave his quiet landscapes and disarmingly simple still-life compositions a delicacy of tone and extraordinary subtlety of design. His gentle, lyrical colours are subdued and limited to clay-toned whites, drab greens, and umber browns, with occasional highlights of terra-cotta. Morandi’s paintings of bottles and jars convey a mood of contemplative repose reminiscent of the work of Piero della Francesca, an Italian Renaissance artist whom he admired.

As instructor of etching at the Academy of Fine Arts in Bologna from 1930 to 1956, Morandi had a profound influence on succeeding generations of Italian graphic artists.

Giorgio Morandi (1890-1964) is one of the most admired Italian painters of the twentieth century, known for his subtle and contemplative paintings, largely of still lifes. From the Metaphysical paintings of his early years, to the nearly abstract canvases made in the 1960s, Morandi engaged in a lifelong attempt to seize reality through the familiar. The consistency and intensity of this investigation has made him the quintessential ‘artist’s artist’.

Working from his studio in Bologna, a place he rarely left for long, Morandi used the same simple elements, including bottles, boxes, and the view from his window, staging a seemingly endless array of variations. His paintings appear to transcend time and place, an effect he achieved by removing labels from his bottles, faces from his clocks, and people from his landscapes. In fact, many of Morandi’s works can be read as arrangements of pure form. This is particularly the case for those produced after 1945, the principal focus of this exhibition. The subtle variations of these late works demonstrate Morandi’s capacity for discovering immense complexity within the self-imposed limitations of his practice.